Hanalei Bay – The Ocean, the Stream, and the Dragon View 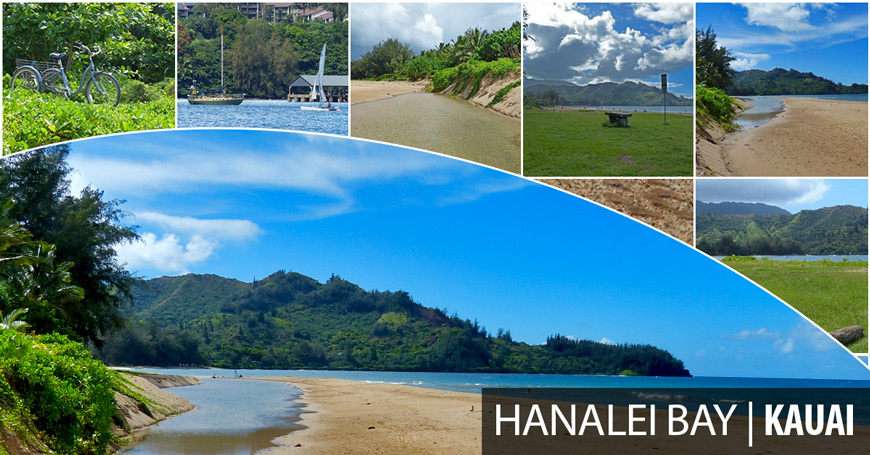 Hanalei Bay on Kauai is one of the most beautiful places I have had the privilege to visit. The large aquamarine bay is surrounded by brilliant green mountains, and the golden sand beach is two miles long. If you want to take one of the best panoramic shots ever, I highly recommend this particular place on the planet.

The month was September the day I was there, and the water was calm – coaxing budding surfers and paddle boarders to try something new. I love swimming in the ocean when the water is gentle, and so I was very happy, because the bay often has high and dangerous surf from September through May. During these months, wave-riding experts come to Hanalei to brave the large waves, which can sometimes reach up to 20 feet high!

I was in Hanalei to gather beach details for you (or perhaps a friend of yours), so I looked carefully for all the different parking areas. Everyone wants quick and easy beach access, and I wouldn’t want you (or your friend) to miss out, just because you couldn’t find a convenient spot. I loved reading the names of the streets that were close to the beach, and envisioning the animals they represented: Mahimahi, Weke, He’e, Malolo, ‘Ama’ama, and ‘Anae.

As you may know, mahimahi is a bullet-headed pelagic predator fish known in other regions of the world as dorado or “dolphin.”

The Hawaiian name for some goatfish species is weke; these fishes rummage through the sand with the two barbels they have on the ends of their chins.

Octopus is a favorite dish in the Islands. The live animal is called he’e, but once it’s on a menu, the name changes to a Japanese word: tako. You may have ordered that item in sushi restaurants. A similar life-and-death name change takes place in the Spanish language, when a gallina (live hen) becomes pollo (cooked chicken).

Malolo is the name for flying fish in Hawaiian. If you’re ever on a boat tour in the Islands, watch for these tiny glittering gliders as they scatter along the surface to either side of the vessel – especially when you’re leaving or returning to the harbor. (As a matter of fact, one of the boats we book on Maui is called the Malolo!)

The striped mullet – an abundant food fish in ancient Hawaii, is known as ‘ama’ama when it is eight to ten inches long, and as ‘anae when it is full grown (about 20 inches). 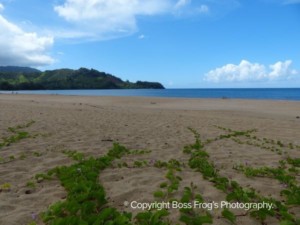 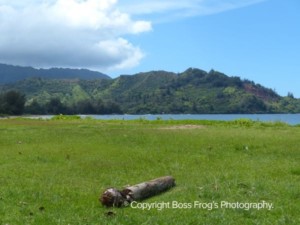 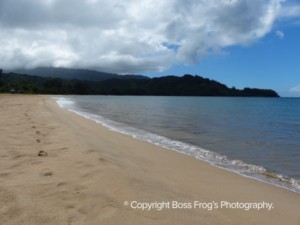 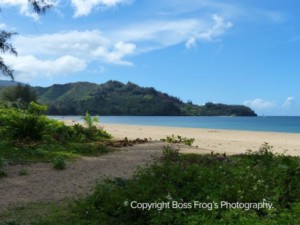 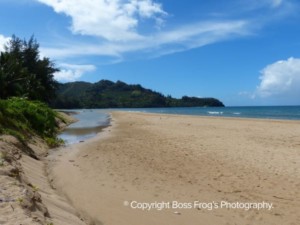 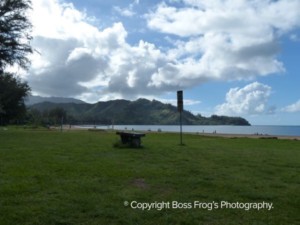 Once I finished admiring the street signs, I parked the rental car and grabbed my camera, notebook, and stainless steel water bottle. I adjusted my hat, rashguard, and board shorts – all of which I was wearing for sunburn protection – and I walked down one of the beach access paths.

When the narrow trail opened out onto the sand, I felt as though I’d stepped into a marvelous dream. My mouth dropped open and, even though I realized leaving it that way was quite uncouth, I couldn’t seem to close it!

Small sailboats cruised by, hardly making a sound. Soft, rippling sand blanketed the shoreline in all directions. Steady, quiet waves shushed onto the sand, and just a handful of people floated in the water. Hanalei Bay is not a snorkeling site, because there is no coral reef growing there. It is, however, a stunning location for a delicious picnic, a volleyball game, a lazy catnap, or a refreshing swim. By the way, when you visit, please ask the lifeguards at Hanalei if it is safe to swim before you enter the water.

The dragon-shaped mountain across the bay watched over everything, covered in trees and silent – at least from where I stood. Perhaps you, too, grew up with the song “Puff, The Magic Dragon,” sung by Peter, Paul, and Mary? There are two lines that sing, “And frolicked in the autumn mist/In a land called Honah-lee!” The hill to the west does look like one of those mythical creatures stretched out on the surface of the sea, and the name of Puff’s land does seem to be a muddled pronunciation of Hanalei. (The correct way to say it is “HA-nah-lay”) While doing research for this story however, I learned that there is in fact no connection between Puff and Hanalei Bay. While exploring the beach, I did find a connection between Hanalei Bay and a very cool stream, though! 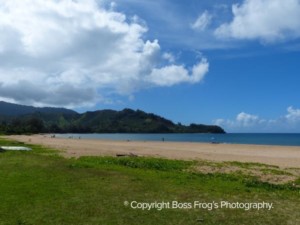 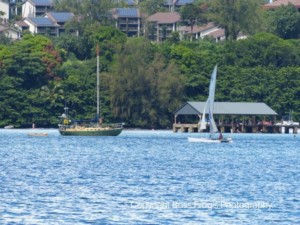 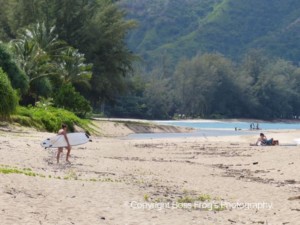 I walked west up the coast, and I soon reached something you don’t see on most Kauai beaches: fresh water pooled along the sand, on the inland side. It turned out that this was the Waioli Stream! The water looked cool and inviting, with a slight greenish cast. Tiny ripples ran along the surface. They were created by the soft breeze from above, and by tiny schools of tiny fish from below.

I stepped into the stream carefully, as a sign of respect. Before I get into any natural bodies of water, I try to pause beforehand (before-toe?) in gratitude, thanking the water for being there, and asking if I may enter. So far, I’ve always felt the answer to be, “Yes!” but I don’t think it fair to expect that to always be the case, and so I ask.

The cool sand at the bottom of this tributary felt amazing. It was such a joy! I sloshed through the waist-deep water, holding my equipment high over my head, and imagined that I was in an uninhabited tropical jungle searching for adventure! (I’ve always been a huge fan of the Indiana Jones series.)

Still in imaginary-movie mode, I giggled at the fact that I was an adult pretending like a child would. I crouched down, and I scanned the sandy stream bank above, but I didn’t see any of the standard movie threats. I did notice, however, a three-wheeled adult-sized bicycle waiting in a stand of naupaka plants. At that point, I decided that Hanalei Bay was clearly a fine place for an adult to play like a kid; the giant tricycle had proven my case! 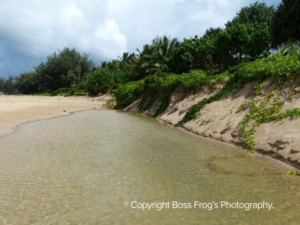 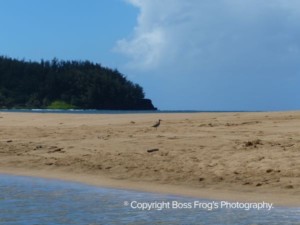 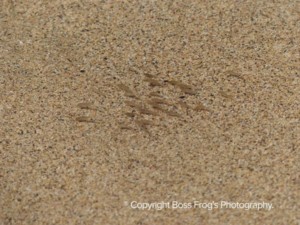 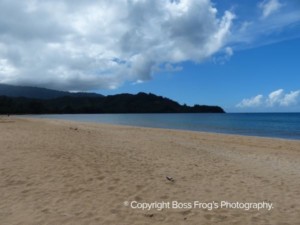 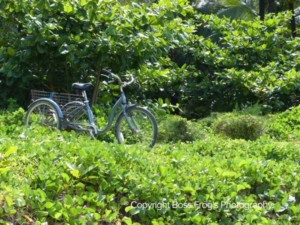 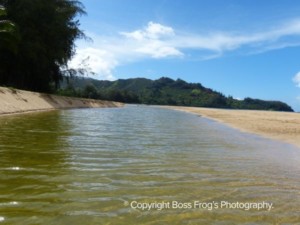 If you’re dreaming of visiting this beach right now, this next bit might sound odd. While I was discovering Hanalei Bay and wading through the stream, I was also at work, you know? I wouldn’t have described myself as relaxed.

That being said, there is something very special about Mother Nature’s white noise. As I continued walking in the water, I cherished the sound of the waves lapping just over the sand bank beyond my line of sight. Eventually, the beach, the beauty, and the stream seeped their way into the hard shell I had created concerning what I needed to do . . . and how fast I thought I needed to do it.

Finally, I smiled up at the sun, clocked out, and dove into the ocean!

After all, I thought, I might not pass this way again.